Skip to Main Content
It looks like you're using Internet Explorer 11 or older. This website works best with modern browsers such as the latest versions of Chrome, Firefox, Safari, and Edge. If you continue with this browser, you may see unexpected results.

Highlights the key points of the Green Deal

The involvement and commitment of the public and of all stakeholders is crucial to the success of the European Union to become climate neutral. Recent political events show that game-changing policies only work if citizens are fully involved in designing them. People are concerned about jobs, heating their homes and making ends meet, and EU institutions should engage with them if the Green Deal is to succeed and deliver lasting change. Citizens are and should remain a driving force of the transition. The Pact is an EU-wide initiative that invites people, communities and organisations to:

The EU has set itself targets to progressively reduce its greenhouse gas emissions up to 2050. The key climate and energy targets are set in the:

These targets have been defined to put the EU on the path towards becoming a climate-neutral economy as detailed in the 2050 long-term strategy and proposed under the Climate Law.

The EU tracks its progress on cutting emissions through regular monitoring and reporting. 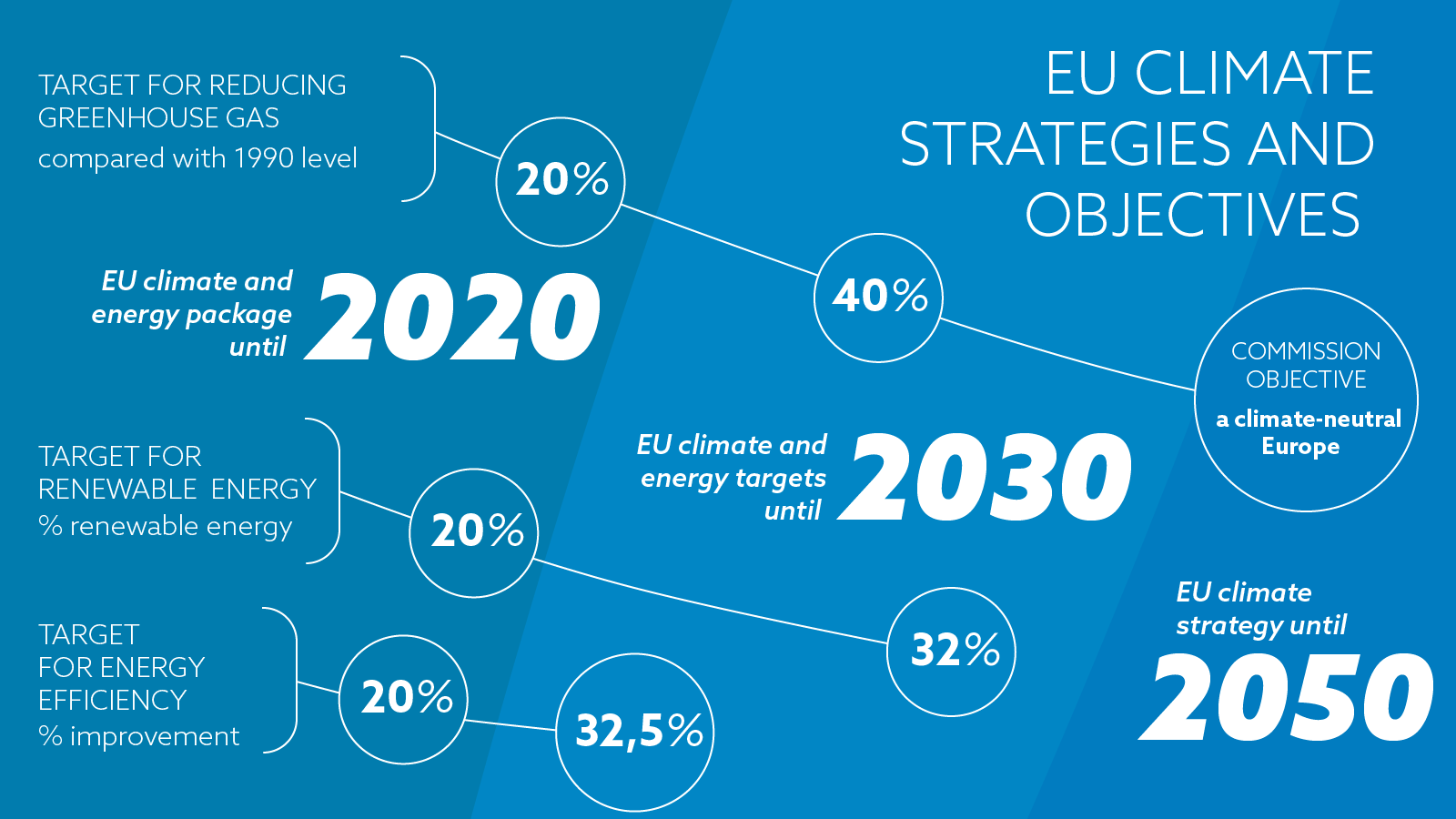 The Commission’s proposal for the first European Climate Law aims to write into law the goal set out in the European Green Deal – for Europe’s economy and society to become climate-neutral by 2050. This means achieving net zero greenhouse gas emissions for EU countries as a whole, mainly by cutting emissions, investing in green technologies and protecting the natural environment. The law aims to ensure that all EU policies contribute to this goal and that all sectors of the economy and society play their part.

The objectives are simple:

The Climate Law includes measures to keep track of progress and adjust our actions accordingly, based on existing systems such as the governance process for Member States’ national energy and climate plans, regular reports by the European Environment Agency, and the latest scientific evidence on climate change and its impacts.

Progress will be reviewed every five years, in line with the global stocktake exercise under the Paris Agreement.

The Climate Law also addresses the necessary steps to get to the 2050 target:

Progress made in cutting emissions

The EU is well on track to meet its emissions reduction target for 2020 and has put in place legislation to achieve its current 2030 climate and energy targets. Member States have prepared integrated national energy and climate plans to achieve their 2030 target.

The EU is well on track to meet its 20% emissions reduction target for 2020.

The EU has put in place legislation to reduce emissions by at least 40% by 2030 – as part of the EU's 2030 climate and energy framework and current contribution to the Paris Agreement.

The effective implementation of national energy and climate plans as submitted to the Commission in 2019/2020 could lead to EU-27 greenhouse gas reductions of 41% in 2030 compared to 1990.

Projections indicate that, if current EU and national policies are fully implemented, EU-27 greenhouse gas emissions reductions by 2030 would be around 45% lower compared to 1990 levels when excluding land use emissions and absorptions, and around 47% lower when including land use.

The existing legislation will now be updated with a view to implementing the new proposed target of reducing net greenhouse gas emissions by at least 55% by 2030. The Commission will come forward with proposals by June 2021.

The Effort Sharing legislation establishes binding annual greenhouse gas emission targets for Member States for the periods 2013–2020 and 2021–2030. These targets concern emissions from most sectors not included in the EU Emissions Trading System (EU ETS), such as transport, buildings, agriculture and waste.

The Effort Sharing legislation forms part of a set of policies and measures on climate change and energy that will help move Europe towards a low-carbon economy and increase its energy security. Under the current Regulation, the national targets will collectively deliver a reduction of around 10% in total EU emissions from the sectors covered by 2020 and of 30% by 2030, compared with 2005 levels. The EU will achieve its climate targets for 2020 and 2030 largely due from the 21% cut in emissions covered by the EU ETS by 2020 and 43% by 2030. 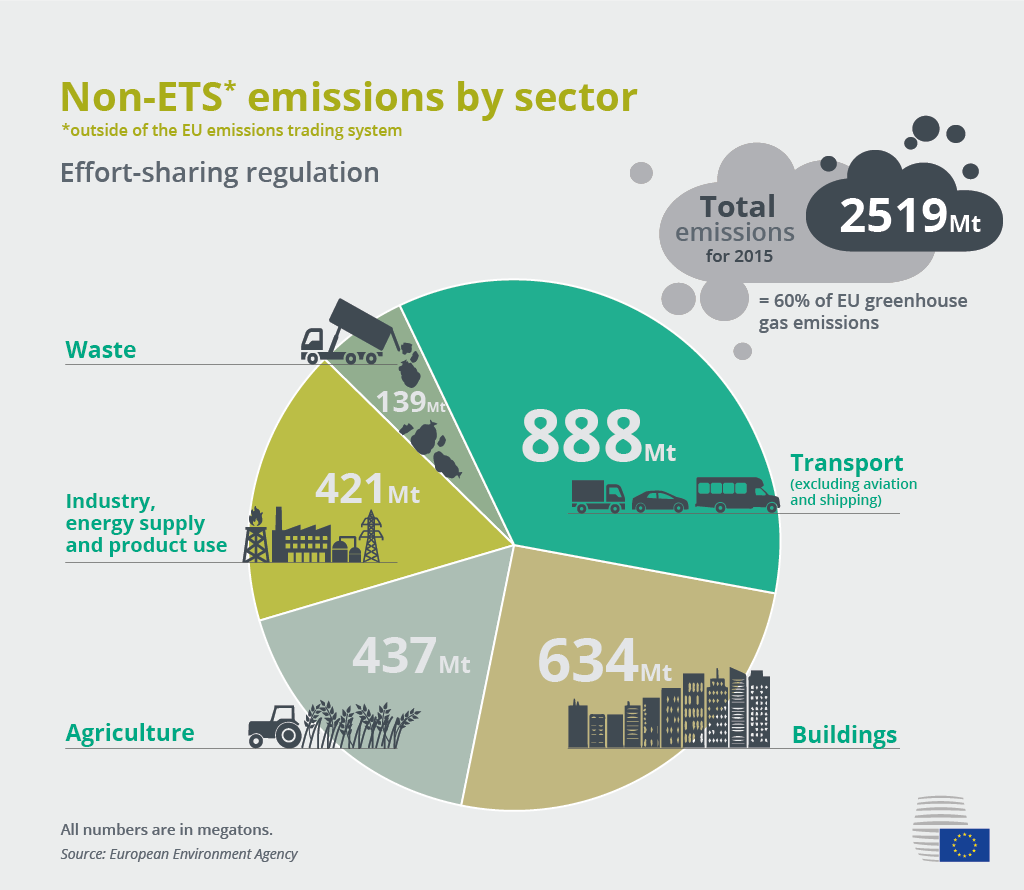 The national targets are based on Member States’ relative wealth, measured by gross domestic product (GDP) per capita. Less wealthy countries have less ambitious targets because their relatively higher economic growth is likely to be a stronger emission driver and they have relatively lower investment capacities. 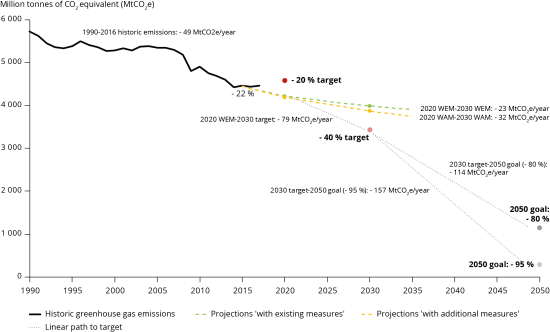 In contrast to sectors in the EU ETS, which are regulated at EU level, Member States are responsible for national policies and measures to limit emissions from the sectors covered by Effort Sharing legislation.

Examples of potential policies and measures include: