Skip to Main Content
It looks like you're using Internet Explorer 11 or older. This website works best with modern browsers such as the latest versions of Chrome, Firefox, Safari, and Edge. If you continue with this browser, you may see unexpected results.

How to evaluate information sources and identify fake news 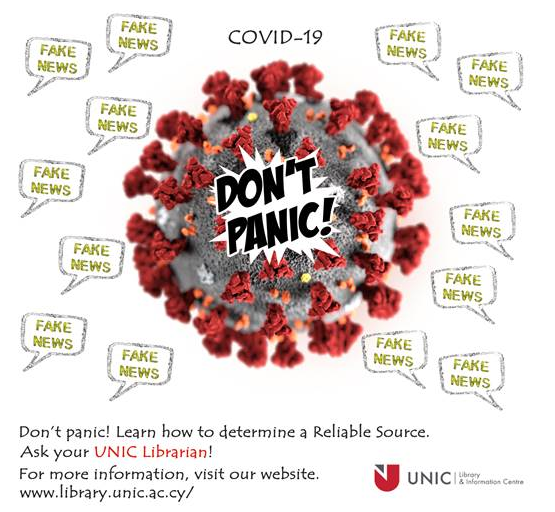 Today’s information environment empowers everyone to be informed, educated, entertained, do research, share information, communicate and much more from wherever he/she is. Information from all over the world is instantaneously available to everyone.
At the same time, many opportunities are offered for unreliable information creators and malicious actions. Learning to evaluate information sources is a key skill both in research and in life.

UNIC Library is here to help you find and use trusted sources for your personal and academic needs. On this guide you will find some tips to evaluate online sources and identify fake news.

Refers to the conviction and acceptance that something is true and real, without the necessary existence of proof.

A tendency to seek and attend to information that confirms the individual’s beliefs or expectations and to discount that which does not: a bias which reinforces stereotyping.

The attempt to simply explain complex realities as a response to fear or uncertainty. It is not falsifiable, and evidence that refutes the conspiracy is regarded as further proof of the conspiracy. Rejects experts opinions and authority.

A form of propaganda involving the dissemination of false information with the deliberate intent to deceive or mislead.

The systematic identification of factual inaccuracies in fake news stories, as in the websites Snopes and PolitiFact.

The running of an item in good faith that turns out to have been invented by a source, whether to make money, in the hope of influencing public opinion, or merely for the amusement of the hoaxer and his/her friends.

The dissemination of false information, either knowing it to be false (see disinformation), or unknowingly.

To give the wrong idea and lead in a wrong direction or into a mistaken action or belief often by deliberate deceit.

A procedure where scholarly work is evaluated by experts of the same discipline against a set of criteria to ensure that it meets the standards necessary for publication. Peer review is widely accepted as the best method for research validation and ensuring quality publications.

The peer-review process may be open, where both author and reviewer are known to each other, or it may be a blind process where the reviewer or the author is anonymized or both author name and reviewer name are hidden.

An item that looks and/or sounds like a genuine piece of journalism but which is a parody produced as a form of satirical journalism or to entertain the audience.

A Dictionary of Media and Communication. Oxford University Press